The annual golf day was again staged at WCGC in Lelant in fine weather and on a course in excellent condition.  Every year we have a few regular stalwarts in the line-up but we also have a number of new faces who hear about the day and come and join us. This year we had a major influx from Cape Cornwall and I would like to thank Steve Peplow for his great recruiting efforts. This year 17 old boys and former members of staff enjoyed the day.  If we managed to field all the old boys who have played in the last 5 years we would have a starting line-up of 33. In the competition we again had a tie at the top which had to be separated by comparing the scores on the last 9 holes (countback). In fact the scores at the top of the field were all very close and I once again thank our Oxbridge mathematician, Frank Blewett (55), for taking charge of the cards and verifying the placings. So with a frisson of tension and no little excitement we all gathered at the 19th hole (in the bar!) to declare the winners: Nearest the Pin on the 15th hole – Paul Reed (65) (7’ 7” away from the hole!!) Longest Drive on the 18th hole – Steve Squires (71) (unmeasured but a monster drive!) Best score by a visitor (non WCGC member) – Lester Ross (56) 3rd in the Stableford – Lester Ross with 34 points 2nd in the Stableford – Ian Fleming (73) with 35 points 1st in the Stableford –   Tim Martin (64) with 35 points and winner of an engraved trophy So Tim managed to avenge his loss of last year when he came second to Jim Glover (47) after scoring the same points but losing on count back. All the above winners received prizes generously donated by Roger Dugdale (52) of Penwithian Wholesalers and the OPA. Everyone enjoyed the day including the opportunity for a chat and catch-up with a drink and a bite to eat in the clubhouse afterwards. I will do my best to ensure that this annual event becomes a long-standing tradition and I encourage more old boys to come along in 2020. Larry Magor (66) Those taking part were : Frank Blewett (55), Paul Reed (65), Tim Martin (64), Steve Peplow (75), Don Ruhrmund (59), Jim Glover (47), Roger Dugdale (52), David Morgan (60), David Philips (Staff), Steve Squires (71), Ian Hanley (78), Larry Magor (66), Ian Fleming (73), Mike Jose (57), Ed Leah (74), Lester Ross (56), John Payne (66). ______________________________________________________________________________

Sought After Book Enlarged and Reprinted 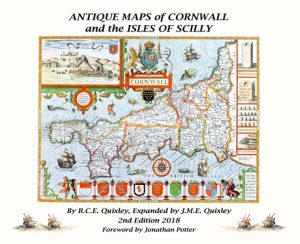 In 1966 former member of staff and old boy Bob Quixley (39) wrote and published what was possibly the first book specifically on the antique maps of Cornwall and the Isles of Scilly. The book has now been updated and expanded with the help of Bob’s son Jonathan (72) and is available at www.quixleymapbook.com or by contacting Bob or Jon directly. The quality of the publication has been described as “superb” and is destined to become another sought after book. Cost is £30 including postage and packing. Anyone living in the West Cornwall area can pick up a copy directly from Bob at his home – “Sona Merg”, Heamoor, Penzance. Contact: Jon Quixley quixleyjl@hotmail.co.uk or Bob Quixley bourqdubost@hotmail.co.uk The book is also available at “Amazon” – www.amazon.co.uk
﻿