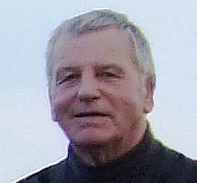 His funeral service was held at Pendeen Parish Church on Wednesday 10th September at 11.00 am followed by private cremation. The church was packed to capacity with a lot of people standing at the back.  Many old school ties were in evidence and several Old Penwithians ties. The organist was Chris Symons (class of ’54) who, during the period before the funeral cortege arrived, played an improvised fugue based on the School Song. A tribute paid by a close friend highlighted the many different roles Andrew had played and the prestigious positions and ranks he had held. He had touched the lives of a great number of people in so many different ways. A second tribute, written by his brother John Coak, concentrated on Andrew’s family life from childhood. He was a family man – husband, father, grandfather and brother – with a love of good food and wine and classical music.

Since he volunteered to take on the role of secretary, in December 1999, Andrew had become the driving force behind the Old Penwithians Association. He guided it through a number of projects working closely with the present day Humphry Davy School. The last of these projects came to a successful conclusion with the rededication of the refurbished Old Penwithians War Memorial, in the old hall at the school, in May of this year.

Andrew’s passing has left a great void which it is difficult to believe one man could have filled. He will be very sadly missed. A wreath was sent for the funeral, on behalf of the Old Penwithians Association, with the message “By Memory’s Chain We Linked Remain” – as indeed we are.

This website uses cookies to improve your experience while you navigate through the website. Out of these, the cookies that are categorized as necessary are stored on your browser as they are essential for the working of basic functionalities of the website. We also use third-party cookies that help us analyze and understand how you use this website. These cookies will be stored in your browser only with your consent. You also have the option to opt-out of these cookies. But opting out of some of these cookies may affect your browsing experience.
Necessary Always Enabled
Necessary cookies are absolutely essential for the website to function properly. This category only includes cookies that ensures basic functionalities and security features of the website. These cookies do not store any personal information.
Non-necessary
Any cookies that may not be particularly necessary for the website to function and is used specifically to collect user personal data via analytics, ads, other embedded contents are termed as non-necessary cookies. It is mandatory to procure user consent prior to running these cookies on your website.
SAVE & ACCEPT